insearch 4 success Why Shutting Up Can Help You Succeed | Insearch4success.com

Why Shutting Up Can Help You Succeed

The other day I was reminded by a friend of mine WHY it’s vitally important to keep quiet when working towards something.

Well to make a long story short, my friend used to be the type where he KNEW everything about anything and wouldn't listen to anyone. He finally found a mentor and LEARNED what he considered one of the TOP SECRETS TO SUCCESS >>>>> TO LISTEN

Check out these videos and on success I found

Well plain and simple everything we do is based off a thought, we think about it and take action towards it. When we think of something we either do something with that thought or we don’t.

Our natural reaction is to speak about the things that we’re doing even if we don’t mean too. Sometimes we just want to share what we’re doing with those who are close to us.

But at times it can look like we’re bragging, and that's not good at all!

Well this might be something small, but by doing that you can actually HURT your chances of even going any further with your projects.

Because if the people you tell aren’t really paying attention, than eventually you’re going to take notice and your motivational level will drop down to zero.

You didn’t even get a chance to fail, why? Because you quit because you started getting all of these little discouraging thoughts, and on top of that your believe level is nonexistent.

If you don’t BELIEVE in yourself, who will?

This is why he said that you should just be quiet until your success starts to show. Then when people take notice you can speak about it, but be careful to spill too much stuff, people will try their best to slam your efforts.

This can’t be any more true when it comes to friends and family. Now those who are closest to you, your parents especially want the best for you. But sometimes their thoughts of what’s best for you are going to conflict with what your thoughts are. 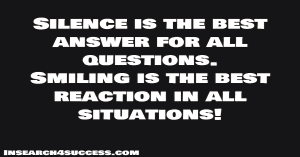 So it’s still wise to keep quiet, and if you are going to say something, only give them like 5 percent of what you’re doing and keep them on the edge of their seat.  The worst thing you can do is spill the beans and then get SLAMMED for doing so.

So my point is this, if you’re feeling discouraged right now on a project that has life changing implications. Sit back and think WHY it’s discouraging you, sometimes it’s not the project at all, it may be the people around you, and the problem probably isn’t them, it’s because you’re saying too much.

So a word to the wise….. STAY QUIET AND LET YOUR ACTION SPEAK FOR ITSELF!