insearch 4 success Why Should I Use Oil Pulling? | The Awesome Benefits Of Oil Pulling | Insearch4success.com

How To Improve Oral Health With Oil Pulling

For about 2 years now, my family has been actively oil pulling every other morning when we get up. My fiancé was the one that got me started on it, she’s a certified health specialist and a master herbalist. She helped me to understand the whole process and why she spent 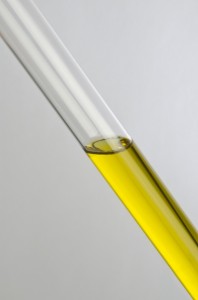 so much time on it. After doing it for awhile I began to love it, and ever since then it's  become a regular part of my cleaning process.

The History Of Oil Pulling

Oil pulling has been around for some time now, but it was first introduced in 1992 by a Dr F Karach MD. His studies took some time to become main stream. He claimed that oil pulling helped to cure and aid an array of different disease’s and hormonal disorders.

The whole concept behind oil pulling is rather easy to understand. Oil pulling actually PULLS out harmful bacteria and other nasty stuff out from our mouths. It also helps to get the stuff around our teeth in the hard to reach places around our gums. The oil acts as a cleanser in our mouth; it’s very powerful and acts like a detoxifier. As all of you know, our mouths are a playing field for bacteria, viruses, fungi, and all kinds of parasites.

Some of the bacteria in our mouths can cause nasty ailments in other regions of our body which can become life threatening. So this is a very important reason to keep our mouths clean and free from these harmful bacteria and viruses.  Our immune systems are constantly battling back and forth against these diseases, but sometimes it can get overloaded, at times because it has to work too hard. Other reasons are because of things like bad eating habits, and lack of exercise, among other things.

Why use oil pulling?

Oil pulling is all natural and doesn’t have the harmful chemicals, such as products you would find at a store or a dentist. In the last few years many reports and studies have been popping up all over the place about how bad fluoride is for us. This is has prompted swift action in people to look for other more natural means of help. 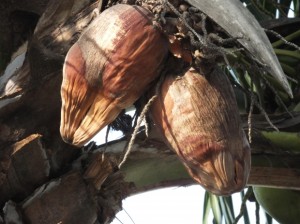 Some of the Benefits of Oil Pulling

Not only is oil pulling great for your mouth region, but it has many other awesome benefits. Here are some of them.

How to oil pull

Probably the most effective way and the way that I do it is to get a tablespoon of either cold pressed coconut or sesame oil and place it in your mouth. Now swish it around for at least 10 minutes and no more than 20 minutes before spitting it out.

DO NOT SPIT IT OUT IN YOUR SINK, IT WILL CLOG IT UP!

DO NOT SWALLOW THE OIL! 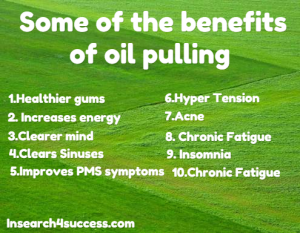 After doing this make sure you brush your teeth, it’s always good  to have a separate brush for this process. Also takes some peroxide, the stuff that’s like 3% that you can get any local store will do. Rinse your mouth and the tooth brush with that. That way you won’t be leaving any harmful bacteria reside on the brush or in your mouth. After you doing this you will notice that you mouth will feel fresher. Also if you have problem with bad breath, this should take care of it. It will also help to whiten your teeth. It won’t happen overnight but after some usage it will begin to show.

I don’t do oil pulling every day; I do it every few days. Some people say to do it daily and others say not to do it. So my process is to do it every few days or so, you may want to try it out 1 time a week at first, then move to 2 times a week once you get used to it.

Great Video I found On How To Do Oil Pulling