THE AWESOME BENEFITS OF THE WATERMELON

As a kid I use to eat watermelons with my friends and we would have contests to see how far we could spit the seeds.  I use to eat it on a regular basis, but back then it never once dawned on me that Watermelon was a super fruit, and that it was excellent for our bodies.  I always wondered how something so watery could stay so crunchy. 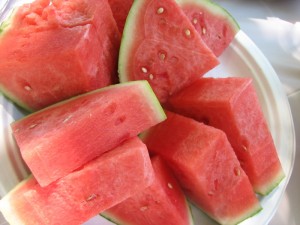 Watermelons are believed to have originated in Africa several thousands of years ago. They eventually migrated across Europe and came to the North America when Europeans migrated this way.  It has been said that we produce almost 4 billion watermelons each year. Almost 85 percent of that being produced by consumers themselves, so watermelon is mainly grown and consumed by those who enjoy it.

Studies have shown that the average person eats around 15 pounds of watermelon each year. Hopefully after reading about the wonderful benefits that Watermelon provides, that figure will rise substantially. China is the world’s leader in watermelon production at the moment.

The United States isn’t far behind along with a few other countries. Interestingly enough, China only produces around 5%percent of the world’s Watermelons each year, since most are grown by consumers.

Watermelons come in yellow, white, and red colors. There are having been debates that the seedless watermelons are actually genetically modified, but this has been proven to be false. The process in which they are made this ways is called “hybridization”.

It’s a process of crossing chromosomes that creates triploid seeds. These seeds eventually grow into seedless watermelons, the seeds that are left in the watermelon are actually not seeds themselves, but are the shell coating of the seeds. Some years back it was almost impossible to locate seedless watermelons, but recently that has changed dramatically. The popularity of seedless watermelons has grown, due to the fact that they are able to grow much easier and effectively than seeded watermelons.

Why should I eat watermelon?

There are numerous things about watermelons that make them an awesome force for our bodies. Watermelons are high in Lycopene, Lycopene is a carotenoid phytonutrient. Lycopene is very important for cardiovascular and bone health. Only 2 other fruit on the planet have more Lycopene then watermelons, and that’s pink grapefruit and guava.

Another awesome thing about Watermelon is its high levels of Citrulline. Citrulline is an amino acid that is converted by our kidneys into arginine. Arginine is a very popular amino acid for those in the athletic world. Arginine helps to promote proper blood flow and cardiovascular health.  For athletes this is great, because arginine helps the muscles to grow more efficiently.

The conversions of Citrulline into Arginine’s benefits go even further than that. Those of you whom are actively working out to lose weight can benefit greatly by eating watermelon. The conversion not only helps to create proper blood flow, but it also helps with fat absorption in the body. It can help boost metabolism levels to the appropriate level, therefore giving those of you whom work out an extra edge.

Watermelons seeds actually have protein in them, there is about 1 gram per every 24 seeds. For those of you looking to supplement protein, this may not be significant source. However, if you’re looking to get some added protein then eating watermelon can only help your cause out. Another great thing to do is to take the watermelon seeds out of the watermelon and put them in strainer. Then wash them off and throw them in a bag, then you can snack on them at work or after the gym with a protein shake for some added protein. The seeds are also high in fiber and excellent for your digestive tract, making the seeds even more beneficial.

The seeds also are full of iron and zinc, which are beneficial to the blood, bone, and immunity purposes. The amount isn’t a real significant source, but the added nutrients to the body can only help you get your required daily nutrients than supplementing without it.

Studies have shown that not only does the inner part have awesome properties to it, but so does the rind part. The rind actually has more nutrients than the inner part due to the fact that it ripens faster than on the inside. Of course eating the rind may taste terrible, but there are ways to create smoothies out of them. Some companies even have extracts made out of the rinds that you can supplement with. The most popular form is by purchasing drinks that have both the rind and the inner part of the watermelon. 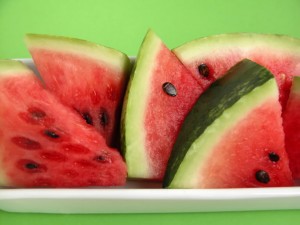 Watermelons have an abundance of flavonoids, carotenoids, and triterpenoids, which make it awesome source of Antioxidants and anti-inflammatory. Its nutrients have the ability to help neutralize free radicles within the body. On top of that, the Lycopene helps to control inflammatory issues people may have, make this a must for those with chronic issues like gout and all forms of arthritis.

Another nutrient that is beneficial in inflammatory issues is beta-carotene.  The types that hold the most beta-carotene are the yellow and pink watermelons. Since the seedless watermelons are not fully grown, they do not contain as much beta –carotene and lycopene as do the other 2 forms.

Watermelons have an excellent source of vitamin C, especially when you look at the ratio of calories to Vitamin C. It’s only about 20 percent of the daily value, but when you reference it to your daily caloric intake, it’s an awesome and healthy source, especially for those of you who are trying to watch your calories.

Where and how to purchase the best watermelons

If your ever gone into a vegetable section at your local grocery store, you’re sure to run into someone thumbing the watermelons. Now popular to contrary belief, thumping the watermelons  is an effective way to see if the watermelon is ripe and ready.  A ripened watermelon will have a deep hallow sound, rather than one that isn’t ready that will have a heavier deeper sound, almost like that of a base.

If you pick up cut watermelon, pay attention to the color and see if there are any white moldy spots on it if it’s supposed to be pink or yellow.  Cut watermelon ripens much quicker and can spoil twice as fast. It’s almost best that if you do pick up some, to eat it within 72 hours of the purchase, because any time after that, the nutrients start to deplete at a drastic rate.

Great Informative video on Watermelon I found, Check it out!